Argentina’s biodiesel exporters, such as Cargill, are hurting after several countries imposed duties, including the United States and Peru. These tariffs are in response to allegations that Argentine exporters sold biodiesel abroad at prices below what they charge at home, a practice called “dumping.”

As more countries place tariffs on Argentine biodiesel and become closed off, exporters are increasingly turning back to the European market to sell their product.

Reuters reports that biodiesel exports fell in the third quarter to 353,034 tonnes or a 30 percent decline from the previous year. In 2016 biodiesel accounted for more than 2 percent of Argentina’s exports.

The fall in exports corresponds to the imposition of countervailing duties by the United States this fall. Duties were placed on biodiesel from Argentina first in August then again in October after a preliminary investigation by the Commerce Department found that Argentine exporters sold biodiesel in the United States at dumping margins of 54.36 and 70.05 percent.

Argentina is a major supplier of biodiesel to the US market. In 2016 biodiesel from Argentina accounted for 62 percent of all imports. 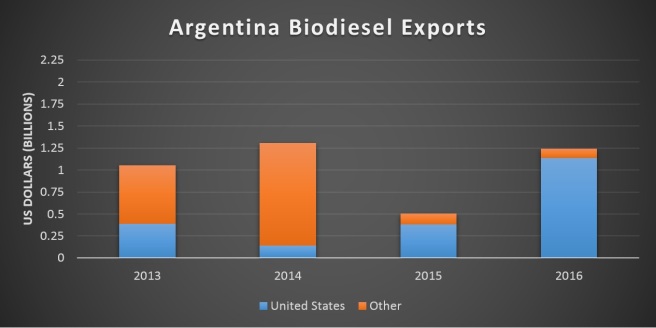 Its large production capacity and access to other foreign sources of biodiesel place the United States in a much stronger position than Argentina. With that in mind, many Argentine producers are turning towards an old market that newly reopened to them.

In 2013 the European Union levied anti-dumping duties of 22 to 25.7 percent against Argentine biodiesel. The EU was the largest market for Argentine exporters at the time.

In September 2017, the EU reduced their anti-dumping duties to between 4.5 and 8.1 percent after a World Trade Organization ruling. At the time, Reuters reported that the European Biodiesel Board would ask the WTO to reexamine the case based on Argentine export duties on soybeans.

Olivier Prost, a lawyer representing the Board, said, “What we are going to do is probably launch a type of proceeding to challenge the distortions that result particularly from the differential export tax.”

According to the US Department of Agriculture, President Mauricio Macri’s government removed the export tax on biodiesel this year, but left the 30 percent tax on soy bean exports and the 27 percent tax on soy oil exports in place.

Macri’s government has made significant strides in reducing the economic controls of his predecessor. However, as this case shows, barriers still exist.

Some of President Macri’s first actions after coming to power two years ago were to eliminate export taxes on agricultural products. His government eliminate taxes on wheat and corn and reduced the export tax on soybeans from 35 to 30 percent. However, his government has stalled in fully eliminating some taxes.

Last year, Reuters reported that the Macri administration would reduce the tax on soybean exports by 0.5 percent per month starting in January 2018 and continuing through December 2019.

Despite the recent victory in the World Trade Organization, Argentine biodiesel exporters will continue to face legal and regulatory challenges in Europe and abroad. President Macri should continue to roll back barriers to trade and protectionist policies put in place by his predecessors in order to make Argentina’s industry globally competitive and to ensure access to global markets.

We hope you enjoyed this article! You can support El Hemisferio by donating through our Patreon.

View all posts by Nathan Davis